John Vero has closed the Vero Agency and joined the new insurance team as its new associate partner. Vero is a lifetime Orange County resident who joined his father as co-owner of the Vero Agency in 1977 before assuming full ownership in 1991.

Since its founding in 1934, Seely & Durland has become an industry leader by serving as a local partner with world-class insurance groups. Seely & Durland and Vero have long collaborated on insurance company markets and automation for several years.

The newly merged company has also added two new members. Micaela Gandarinho has joined the group as its director of first impressions – its first point of contact for all clients and partners.

Samantha Tamburelli has joined the company as its new commercial lines assistant. Born and raised in Warwick, her local roots run deep. She attended SUNY Orange and then worked at St. Anthony Community Hospital as the emergency room registrar and admitting clerk. She has also worked at several Warwick restaurants. 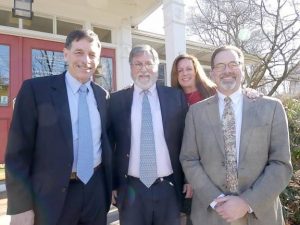 Want to get notified whenever we write about Warwick Valley Chamber of Commerce ?

Sign-up Next time we write about Warwick Valley Chamber of Commerce, we'll email you a link to the story. You may edit your settings or unsubscribe at any time.